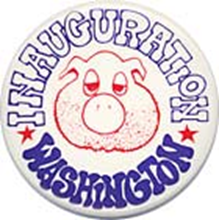 Jan 18 -19 Yippies and others hold a counter-inaugural parade, and at midnight they hold mock swearing-in ceremony. The character representing the president wears a pig mask, followed by a play assassination. They have an inaugural ball, with a poetry reading, a light show and rock bands. Many in the United States, including liberals, ignore it or dismiss it as an infantile disorder. A writer for New York’s hippest newspaper, the Village Voice, describes the “bash” as “more depressing, deluded, exploitative, and trapped in the past than any straight event I attended during my time in Washington.”