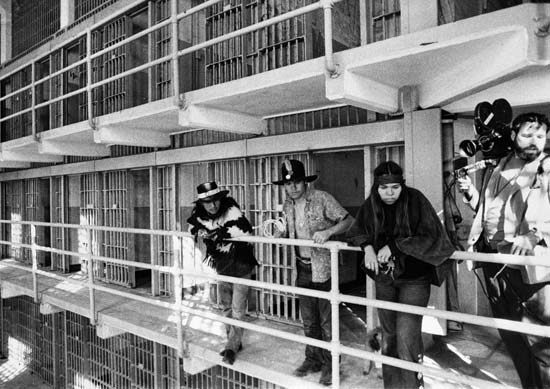 The Occupation of Alcatraz (November 20, 1969, to June 11, 1971) was a nineteen month long protest, when 89 American Indians and their supporters occupied Alcatraz Island. The protest was led by Richard Oakes, LaNada Means, and others; John Trudell was the spokesperson. This group lived on the island together until the protest was forcibly ended by the U.S. government.

The protest group chose the name Indians of All Tribes (IOAT) for themselves.  According to the IOAT, under the Treaty of Fort Laramie (1868) between the U.S. and the Lakota, all retired, abandoned or out-of-use federal land was returned to the Native people who once occupied it. Since Alcatraz penitentiary had been closed on March 21, 1963, and the island had been declared surplus federal property in 1964, a number of Red Power activists felt the island qualified for a reclamation by Native people.

The Occupation of Alcatraz had a brief but somewhat direct effect on federal Indian Termination policies, and established a precedent for Indian activism. Oakes was shot to death in 1972, and the American Indian Movement was later targeted by the federal government and the FBI in COINTELPRO operations.