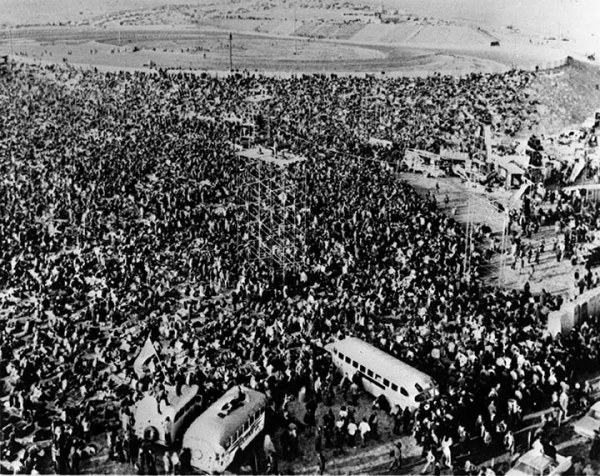 The Altamont Speedway Free Festival was a counterculture rock concert held on Saturday, December 6, 1969 at the Altamont Speedway, northern California, United States.  The event is best known for considerable violence, including the stabbing death of Meredith Hunter and three accidental deaths: two caused by a hit-and-run car accident, and one by LSD-induced drowning in an irrigation canal.  Scores were injured, numerous cars were stolen and then abandoned, and there was extensive property damage.  The concert featured (in order of appearance): Santana, Jefferson Airplane, The Flying Burrito Brothers and Crosby, Stills, Nash & Young, with the Rolling Stones taking the stage as the final act.  The Grateful Dead were also scheduled to perform following CSNY, but declined to play shortly before their scheduled appearance due to the increasing violence at the venue.  “That’s the way things went at Altamont—so badly that the Grateful Dead, prime organizers and movers of the festival, didn’t even get to play,” staff at Rolling Stone magazine wrote in a detailed narrative on the event, terming it in an additional follow-up piece “rock and roll’s all-time worst day, December 6th, a day when everything went perfectly wrong.”  Approximately 300,000 attended the concert, and some anticipated that it would be a “Woodstock West”.  Woodstock was held in Bethel, New York, in mid-August, less than four months earlier. Filmmakers Albert and David Maysles shot footage of the event and incorporated it into the 1970 documentary film titled Gimme Shelter.