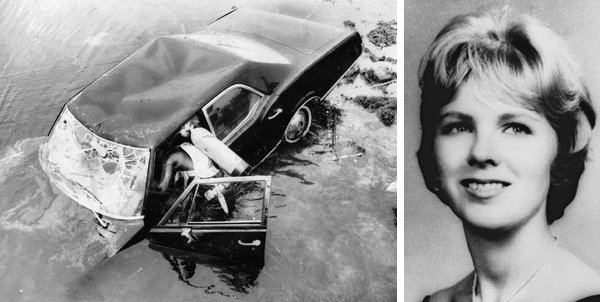 The Chappaquiddick incident was a single-vehicle car accident that occurred on Chappaquiddick Island in Massachusetts on Friday, July 18, 1969.  The late-night accident was caused by Senator Ted Kennedy’s negligence and resulted in the death of his 28-year-old passenger Mary Jo Kopechne, who was trapped inside the vehicle.  According to Kennedy’s testimony, he accidentally drove his car off the one-lane bridge and into the tide-swept Poucha Pond.  He swam free, left the scene, and did not report the accident to the police for ten hours; Kopechne died inside the fully submerged car.  The car with Kopechne’s body inside was recovered by a diver the next day, minutes before Kennedy reported the accident to the police.  Kennedy pleaded guilty to a charge of leaving the scene of an accident causing personal injury and later received a two-month suspended jail sentence. The Chappaquiddick incident became national news that likely influenced Kennedy’s decision not to campaign for President in 1972 and 1976, and it was said to have undermined his chances of ever becoming President.