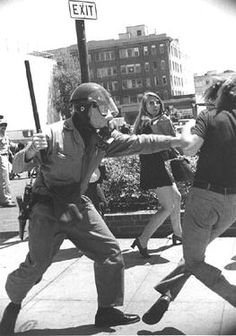 People’s Park in Berkeley, California is a park located off Telegraph Avenue, bounded by Haste and Bowditch streets and Dwight Way, near the University of California, Berkeley.  The park was created during the radical political activism of the late 1960s.  The local Southside neighborhood was the scene of a major confrontation between student protesters and police in May 1969.  A mural near the park, painted by Berkeley artist O’Brien Thiele and lawyer/artist Osha Neumann, depicts the shooting of James Rector, a student who died from shotgun wounds inflicted by the police on May 15, 1969.

May 15 At dawn, a chain-link fence is quickly erected around a one-third acre of university-owned property called People’s Park – ordered by the university’s Board of Regents. Rioting begins as a crowd of about 3,000, many of them non-students, march from a noon rally on campus intent on “taking back” the park.  Governor Reagan is involved with the Regents regarding Berkeley and calls for a tough response against trouble.  The Country Sheriffs carry shot guns.  A few “street people” on roof troops throw stones down onto the police. By the end of the day one young man on a roof-top, James Rector, has been shot and is near death.  Another is blinded.  At least 128 persons are treated in local hospitals for head trauma from clubbing, shotgun wounds and other injuries inflicted by law enforcement.  Hundreds have been taken to a nearby prison at Santa Rita.  Anti-police warfare results in minor injuries for nineteen policemen. None is hospitalized.

May 21 James Rector has died of his wounds.  People gather on campus listening to speakers regarding Rector.  It is considered an illegal assembly and National Guard troops with drawn bayonets force the crowd to disperse. Rioting erupts. Helicopters fly over the campus dropping CS gas. Gas carries into Cowell Hospital on the edge of the campus and over most of the rest of campus.  Classes are closed and the campus vacated. Some who are late in leaving run through clouds of gas and past club wielding police with gas masks.  The entire city of Berkeley is put under military control, including a curfew.  Downtown Berkeley is lined with rows of barbed wire. City Councilman Ron Dellums, a Democrat and future chairman of the Congressional Armed Services Committee, rises as a spokesperson for the outraged.

May 30 Berkeley citizens, numbering approximated 30,000 (out of a total of 100,000), have secured a Berkeley city permit and march without incident past barricaded People’s Park to protest recent events. Young girls slide flowers down the muzzles of bayoneted National Guard rifles, and a small airplane flies overhead trailing a banner that reads, “Let a thousand parks bloom.”

While legally the land is the property of the University of California, People’s Park has operated since the early 1970s as a free public park. Although open to all, it is often viewed as a daytime sanctuary for Berkeley’s low income and large homeless population who, along with others, receive meals from East Bay Food Not Bombs.  Nearby residents, and those who try to use the park for recreation, sometimes experience conflict with the homeless people.