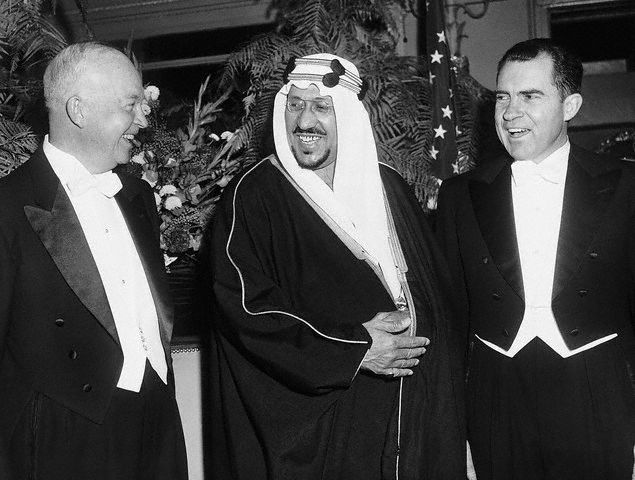 On this day in 1969, Dwight D. Eisenhower, the nation’s 34th president, died of congestive heart failure at Walter Reed Army Hospital in Washington, D.C. He was 78. Eisenhower, who was in office from 1953 to 1961, spent much of his retirement years with his wife, Mamie, at their farm near the Civil War battlefield in Gettysburg, Pennsylvania. Two years before his death, they donated the farm to the National Park Service.

His presidential reputation, which had suffered a dip with the advent of the New Frontier and the Great Society, has since rebounded. Among other achievements, he is favorably remembered for having ended the Korean War and championing the Interstate Highway System. In 2012, historian John Lewis Gaddis reflected that “historians long ago abandoned the view that Eisenhower’s was a failed presidency … Not until [Ronald] Reagan would another president leave office with so strong a sense of having accomplished what he set out to do.” In retirement, Eisenhower remained marginally active in political life. He spoke at the Republican National Convention in San Francisco in 1964, unleashing well-received barbs against the media. On the way to the convention, Eisenhower was interviewed in his private rail car on the Super Chief, the flagship train of the Atchison, Topeka and Santa Fe Railway, by a reporter for the New York Herald Tribune. Eisenhower voiced his anger at articles that had charged he had not done enough to prevent the Republican Party from falling under right-wing control. Some press critics wrote that he should have gone all out in supporting the presidential candidacy of Pennsylvania Gov. William Scranton, a moderate.

“They [the press] say I am losing my mind,” Eisenhower said crisply in his five-star general’s voice. “They forget I crossed the [English] Channel in 1944,” directing an invasion of the continent that helped lead to the defeat of Nazi Germany in May 1945. Eisenhower gave the 1964 GOP nominee, Sen. Barry Goldwater of Arizona, a less-than-enthusiastic endorsement while agreeing to appear with him in a campaign ad filmed in Gettysburg. He never fully forgave Goldwater for having once castigated him as “a dime-store New Dealer.” At Eisenhower’s funeral in Abilene, Kansas, President Richard Nixon said: “Some men are considered great because they lead great armies or they lead powerful nations. For eight years now, Dwight Eisenhower has neither commanded an army nor led a nation; and yet he remained through his final days the world’s most admired and respected man, truly the first citizen of the world.” In 1999, Congress created the Dwight D. Eisenhower Memorial Commission. In 2009, the commission chose the architect Frank Gehry to design the memorial, which will stand on a four-acre site near the National Mall on Maryland Avenue, across the street from the Smithsonian’s National Air and Space Museum. SOURCE: “EISENHOWER IN WAR AND PEACE,” BY JEAN EDWARD SMITH (2012)