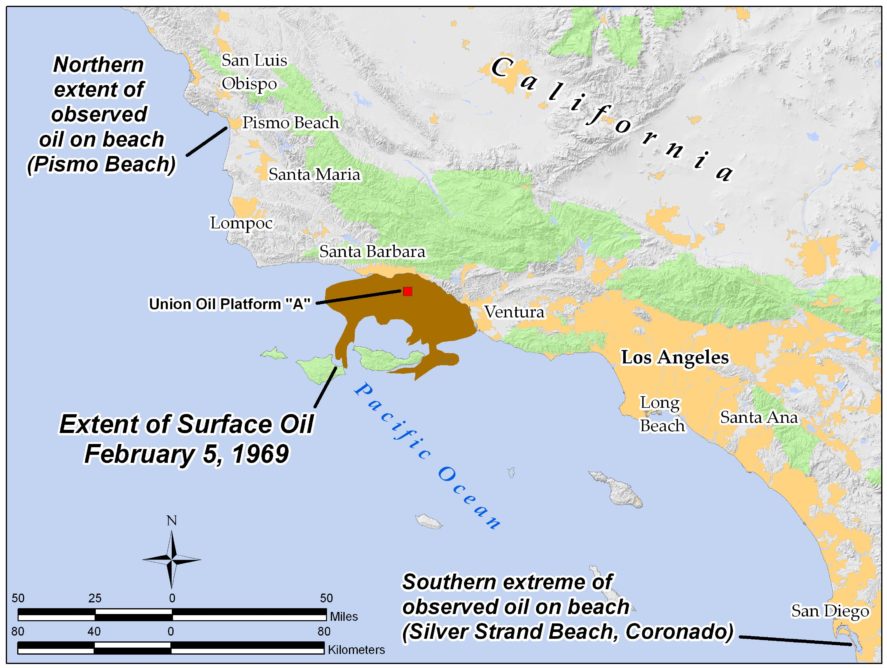 Jan 29, 1969, near Santa Barbara California, an offshore oil well begins what in the coming eleven days will be the release of 200,000 gallons of oil that will spread over 800 square miles of ocean and 35 miles of coastline. The people of this affluent part of California are outraged.

The Santa Barbara oil spill occurred in January and February 1969 in the Santa Barbara Channel, near the city of Santa Barbara in Southern California. It was the largest oil spill in United States waters by that time, and now ranks third after the 2010 Deepwater Horizon and 1989 Exxon Valdez spills. It remains the largest oil spill to have occurred in the waters off California. The source of the spill was a blow-out on January 28, 1969, 6 miles (10 km) from the coast on Union Oil’s Platform A in the Dos Cuadras Offshore Oil Field. Within a ten-day period, an estimated 80,000 to 100,000 barrels (13,000 to 16,000 m3) of crude oil spilled into the Channel and onto the beaches of Santa Barbara County in Southern California, fouling the coastline from Goleta to Ventura as well as the northern shores of the four northern Channel Islands. The spill had a significant impact on marine life in the Channel, killing an estimated 3,500 sea birds, as well as marine animals such as dolphins, elephant seals, and sea lions. The public outrage engendered by the spill, which received prominent media coverage in the United States, resulted in numerous pieces of environmental legislation within the next several years, legislation that forms the legal and regulatory framework for the modern environmental movement in the U.S